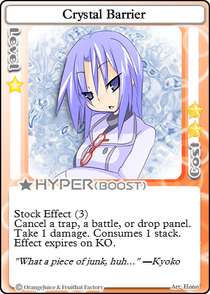 This effect does not cancel battles initiated by the player. Any trap cards negated will count as being triggered but simply having no effect.

If Crystal Barrier is used while it is already in effect, the effect will stack, but only to a maximum of 3 stacks.

Crystal Barrier has one main objective: protecting the player from everything. As the Hyper has a low level requirement and relatively affordable price, Kyoko can begin protecting herself very early in the game, giving her an edge against aggressive opponents.

The barrier created by the Hyper has 3 stocks and protects against any form of danger, which makes it very versatile in usage. The Hyper can be used for multiple purposes such as protecting Kyoko during the BattlefieldBattlefield
Every 6 Chapters, all

Encounter panels. This effect lasts for 3 Chapters. field event, from boards littered by numerous traps, and from attacks if swarmed by enemies. However, the Hyper is best used when Kyoko has low HP. As the effect deals 1 damage whenever it triggers, it can be used like QP's

Hyper Mode to purposely KO Kyoko without losing any stars.

The main downside to the Hyper is that it is not incredibly effective during the late game. As is common with other tank characters, multiple opponents will likely target Kyoko during the closing turns of the game which will likely burn through the barrier fast. If the player is unfortunate enough to roll on too many

Boss panels, or be on a board with the BattlefieldBattlefield
Every 6 Chapters, all

Encounter panels. This effect lasts for 3 Chapters. field event, the effect will quickly be wasted.