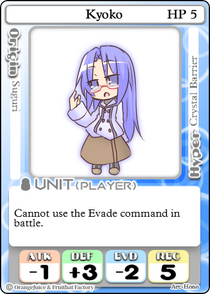 Kyoko (キョウコ Kyōko) is one of the playable characters in 100% Orange Juice!. She was added to the game in DLC 5

With a defense stat unrivalled by any other character, Kyoko is the ultimate tank boasting the highest defense in the entire game. Sharing many similarities with Fernet, Kyoko acts as a fortress, able to shrug off most combat damage with high defense rolls. At the minimum, Kyoko will always roll at least a 4 for defense and a 9 at maximum without adjustments to her base stats. From a mathematical standpoint, Kyoko takes, on average, the absolute least amount of damage of any character in the game from +1 ATK or higher. As a result, Kyoko is able to absorb large amounts of punishment and even survive most opponent's Hyper cards if the player rolls well. If the player chooses to use Battle cards to increase Kyoko's DEF like

Shield, her fortitude becomes almost impossible to penetrate, even by usually devastating Hyper cards such as

Another Ultimate Weapon. Moreover, her

Hyper is one of the strongest denial tools in the entire game, allowing her a safe self-KO that prevents her from losing stars, while also having the added bonus of negating

Kyoko's main drawback is she cannot evade in any scenario. As result, her survivability is considerably reduced: Even with perfect rolls, Kyoko is guaranteed to receive at least 1 damage while defending. Though this makes her playstyle very predictable and simple across games, it leaves little room for error. She will want to find ways to mitigate this, such as healing and getaway cards.

Encounter panels are hazardous, as they will quickly chip away at Kyoko's average HP. Given her below average ATK stat, she is often not seen as a threat to pursuing opponents. Kyoko's Hyper can also be seen as a disadvantage in some ways, as it is not offensive, meaning that there is no plausible way for Kyoko to fight well or KO opponents quickly — she can only absorb damage, with little chance of dealing much back.

Drop panels and traps
Cons
-Unable to evade attacks
-Poor combat ability: will eventually be whittled down
-Reliant on healing cards
-Hard to regain lost stars due to lack of star-gain ability