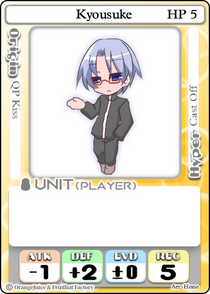 Kyousuke (キョウスケ Kyōsuke) is one of the playable characters in 100% Orange Juice!. He was added to the game in DLC 2 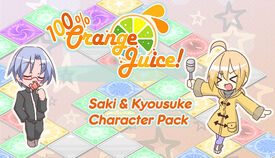 alongside Saki. Kyousuke originates from the April Fools' game QP Kiss. While he is referred to as Kyoko's brother in some games, he was initially conceived as a gender-bent version of her.

Like his female counterpart, Kyoko, Kyousuke is a tank character able to take a decent amount of damage, while being unable to deal much back. Wielding nearly identical stats to Fernet, Kyousuke does not have as much HP, but makes up for the loss with a neutral evasion stat. This stat enables Kyousuke to potentially survive much longer than other tanks, as he can dodge weak attacks from NPCs on

Encounter panels with much more reliability. Kyousuke's main strength, however, comes from his unique hyper that enables him to fight back, unlike any other defensive character.

Like all high-defense characters, Kyousuke suffers from the usual weaknesses of only being able to survive so many combats before being inevitably KO'd. With his reduced ATK stat, he also may struggle to hit an evading target.