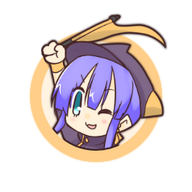 This page needs to be expanded with information about recommended strategies. You can help 100% Orange Juice Wiki by expanding it.
Saint Eyes 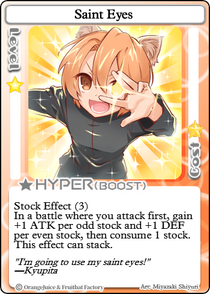 Stock Effect (3). In a battle where you attack first, gain -1 ATK and +1 DEF for every 2 stock, and +1 ATK per stock. This effect can stack.
Hyper Info
Effect Type
Boost
Level
1
Cost
10 ★
Symbol
[[File:|30px|link=]]
Illustrator
Miyazaki Shiyuri
"I'm going to use my saint eyes!" - Kyupita

If Saint Eyes is used while it is already in effect, the effect will stack.

On its own, the buff that Saint Eyes gives is alright for a Hyper considering the low cost and base level Norma requirement, however its true potential is realized when stacking it. When using Saint Eyes, it's a good idea to build up as many stocks of it as possible as quickly as possible for multiple reasons. For one, stat-wise it is better to stack 2 Saint Eyes together than to deplete the 3 stocks of each card 1 at a time.

For example, compare the ATK and DEF buff given over 6 battles where the player had stacked 2 Saint Eyes cards compared to a player who used each Saint Eyes card individually, after the stocks of the previous were depleted.

By saving his Saint Eyes stocks, Kyupita gets extra value out of Saint Eyes.

Nice Present, and possibly even

Encore in order to increase the chance of the player finding multiple Hypers in as little time as possible.

Additionally, battle cards that increase ATK on top of Saint Eyes like

I'm on Fire! can also help to support Kyupita's ATK as the stocks start to decrease (or to one-shot players).

Care should then be taken to avoid

Encounter panels when you have Saint Eyes stocks since they deplete them. The stocks can then be saved for more valuable targets such as other players or bosses on low HP.