100% Orange Juice Wiki
Register
Don't have an account?
Sign In
Advertisement
in: Level 4 cards, Event cards, Base pack,
and 2 more 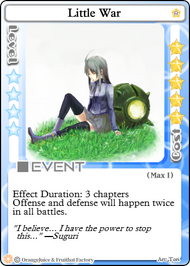 2
Symbol
30px
Illustrator
Tori
Rare Card
Base Pack
"I believe... I have the power to stop this..." —Suguri

Little War is a collectible Event card that can be acquired from the Base Pack.

When used, for 3 chapters, adds 1 additional round of attack and defense to each battle.

At its higher price, the card is generally best used with

Play of the Gods to lower the price. Lowering the price is also very useful to make use of the fact that the card is an event, enabling the player to combo it with battle cards for maximum effect.

The best uses for Little War are generally with battle cards that put the opponent at a huge disadvantage. For instance, cards such

Accel Hyper, among others, put the opponent at a steep disadvantage for two rounds of combat. Other non-battle cards, such as

Super All-Out Mode can also become much more influential while Little War is active. The card can also be useful for general use by bullies like Star Breaker and Tomomo, since their +2 ATK stats already put them at a combat advantage.

The main disadvantage of Little War is its price and level. With its high Norma level requirement and star cost, the card simply does not get played often, and opponents are generally unlikely to activate it. The card is also risky in the sense that the dual combat may backfire for the player, and cause them to get KO'd if the opponent is well equipped. The card also does not guarantee combat like

Final Battle, and although the player will have the added edge of battle card support, they may not be able to reach the opponent to attack in the 3 turns provided.