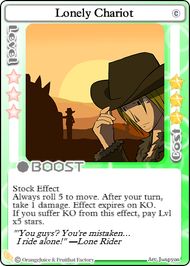 Lonely Chariot is a 3-star boost card that causes the user to roll 5's for all movement rolls for as long as the effect is active. At the end of each turn, the player will take 1 damage. If KO'd by this damage, the player will lose 5x their level in stars. Any KO will cancel these two effects, but KOs from other sources, such as battles or cards like

Mimyuu's Hammer will not cause the user to lose the extra stars.

Lonely Chariot is an unusual boost card. Although it may appear as a worse version of

Dash! on first glance with its high price and punishing effect, the card actually has a wide variety of uses.

One potential use of Lonely Chariot is to deny wins or stars to an opponent. If the user is low on health and an opponent is pursing, the card can be used to run away and self-KO to prevent the opponent from taking the player's stars. This is not a very efficient use of this card, however, as the total star loss will be at least 45 stars (activation fee + base activation level) and 25 with

President's Privilege. As a result, this method as not advised (unless the player is far ahead in stars) as they can use other better cards such as,

Here and There, and healing cards such as

Pudding to survive. The player can work around this however, if they line themselves up with board effects such as BomberBomber
Every 2 Chapters, place a visible bomb on a random panel. The bomb will explode within 1 to 4 Chapters, and units within 2 panels in a cross-shaped area of the bomb panel will take damage. or Air RaidAir Raid
Every 5 Chapters, all units will take 1 damage at the beginning of the Chapter. to prevent the secondary star loss.

One of the more effective and reliable way of using this card to activate it while playing as high-attack character such as Yuki or Tomomo while aiming for Wins Norma. When using this method, it is best to attack the target once normally and then use Lonely Chariot on the next turn to minimize the HP loss. The effects of this card means that unless they roll a six every single turn or get teleported away, they will never escape from the player. Using the card in this way makes it essentially function as an alternative

Final Battle card, having some advantages and disadvantages over it. When you using Final Battle, the player denies themselves the use of other battle cards, while allowing the opponent to use battle cards of their own. In the worse case scenario, the player may have to face off against powerful hypers such as

Blue Crow the Second and

Deploy Bits for an extended period of time. With Lonely Chariot, however, the player can play battle cards normally for one sequence of combat. Lonely Chariot also has a lower norma level requirement and three of them are allowed in a deck. The disadvantage of using the card in this way is that the player takes damage after every turn, so if they fail to KO the opponent within two turns it can be fairly risky, meaning it is most effectively used against characters who are easy to kill and/or have poor offensive stats such as Saki or Marie Poppo.

The third and most unique strategy is to pair it with certain hypers that require or do better with low HP. By using the card this way, the player uses the disadvantage of the card, health loss, as an advantage. For instance, the card can be used with Syura to reduce her health to make

Beyond Hell more powerful. It can also be used to great effect with

Final Surgery to lower Kiriko's health so she can KO herself, or similarly with Alte's

The fourth and final usage for the card is to guarantee a specific roll or end a game. If the player has 230 or more stars and are relatively close to their

Home panel, it can used to get there faster and win or land on an opponents home exactly. Or if the boss has one HP left, the

Boss panel is 5 spaces away, and the player wants to KO it, it can be used to roll exactly.