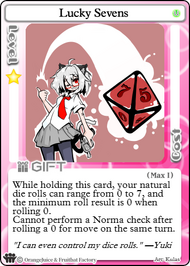 While holding this card, your natural die rolls can range from 0 to 7, and the minimum roll result is 0 when rolling 0.
Cannot perform a Norma check after rolling a 0 for move on the same turn.
Level
1 ☆
Cost
0 ★
Limit
1 per Deck
Deck Points

Lucky Sevens is a collectible Gift card that can be acquired from the Community Pack 3.

When this Gift card is held, it applies the Lucky Sevens stock effect to the player. While active, each of the player's natural dice rolls will range from 0 to 7, as opposed to the usual values of 1 to 6.

In addition, a number of additional effects will apply only when the player rolls a natural 0 on any die:

Upon use, this card will be discarded.

icon will hover around the player. The player's selected dice cosmetic will also be changed to a unique eight-sided die, themed after the Lucky Sevens artwork.

Lucky Sevens is a card with a simple effect that subtly influences multiple things at once. This can be beneficial in a number of ways.

However, this card does have numerous drawbacks.