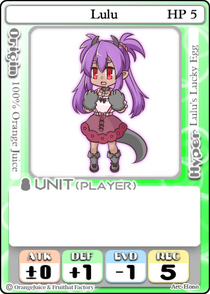 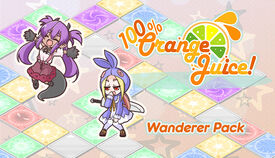 Lulu (ルルゥ Ruru u) is one of the playable characters in 100% Orange Juice!. She was added to the game in DLC 26

A kind-hearted girl with no knowledge of her origin, Lulu is a nervous girl with a love of food and play. Lulu features a rather sturdy stat line, with a health stat of 5, a slightly buffed defense stat, a below-average evasion stat, and a neutral attack and recovery stat. Based upon these stats, Lulu is not particularly effective at offensive play, but her positive defense stat and high HP provide her with notable durability, which serves as one of her greatest strengths. Lulu can generally survive

Boss panels as her defense will be able to protect her from high rolls, and her evasion stat, although reduced, is still relatively useful for protecting her from low rolls as well. The player can also capitalize on LuLu’s durability by using cheap cards such as

Saki's Cookie which can keep the player alive for longer. While Lulu’s doesn’t have any attack stat modifiers, she still has the can deal marginal damage in combat, which can make opponents wary of a potentially powerful counter-attack. Lulu’s other strength comes from hyper which can provide the player with a host of ways to gain a large edge against opponents, with one even providing Lulu with incredible late-game stats.

Lulu is not invincible, however. As one might expect, Lulu’s +1 defense may provide extremely exciting results or barely help at all depending on the player's luck. A reduced evasion stat also harms Lulu’s ability to survive, despite her high health pool, as the player is often better off defending against lower rolls like 3. Lastly, Lulu can be bullied and likely will be, as her stats generally encourage passiveness. While this technically assists her hyper, it may backfire on the player. Lulu’s stat line is that of a pseudo-tank, and while she doesn’t have the disadvantage of a reduced attack stat, her counter attack rolls are likely to be inconsistent, which can put the player into trouble quickly if being pursued by a powerful opponent like Tomomo.

As previously stated, Lulu will likely be played passively more often than not and focus on star norma. The player may be able to change their approach, however, depending on how well the combats go, and what results the player gets from

Lulu's Lucky Egg. The player will want to focus on

Bonus panels and bring cards that take advantage of Lulu’s innate defensive strengths. Generally, the player will want to find/use 1-2 copies of Lulu’s hyper per game, if possible, and pack a defensive battle card or healing card toward the late game.