< Marc
Edit
It has been suggested that this article or section be merged with Marc/Strategy. 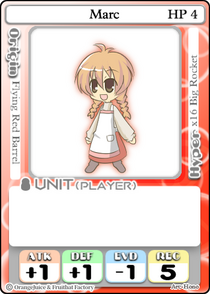 In Co-op mode, Marc doesn't change much as her hyper remains the same, however, her recovery stat rises.

Marc's defensive durability and already boosted attack stat make attacker her best role. At the max level, she will have an attack stat of +3 and her defense will aid in keeping her alive. Further her hyper will help the player deal substantial damage to the boss. Unfortunately, the debuff to her recovery stat makes her less viable as does her low HP, thus it may be beneficial to play with a guardian or supporter ally to help keep Marc in good combat-ready condition.

Given Marc's slightly boosted defense stat, guardian can be a viable choice

While Avenger might seem like a poor choice for Marc on paper, she can use the role to become a more balanced character that can provide additional deck points thanks to her low rank and hold the team's defensive line. With all the Avenger buffs, she can reach 6 HP, which although not high for an Avenger, when coupled with her +1 Defense, allows her to tank most unboosted hits and then strike back with a +2 or higher attack. Her +1 Attack also gives her added consistency on

Encounter panels, allowing her to farm wins even as an Avenger when going for normal. With the additional deck points, the player can provide useful cards to teammates for consistency, such as putting I'm on Fire! for teammates in Attacker role such as Kae, or adding an Accel Hyper for a Sora or Sora (Military) to complete the combo. Or more simply pack 3 Dinner cards for the team can assist the team in surviving longer. Her main weakness as an Avenger is a lack of reliable recovery, so the player will want to stick close to a Support teammate if they're not preoccupied with healing the Attacker(s).