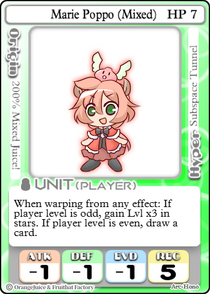 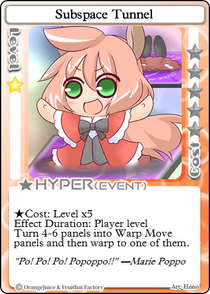 Marie Poppo (Mixed)'s Hyper is Subspace Tunnel. When used, 4-6 random panels on the board will be transformed into

As a Hyper that enables its user to warp to a random space on the board, Subspace Tunnel is best used as a method of repositioning. Although Mixed Poppo's Hyper does not give her the ability to choose where she warps to, Subspace Tunnel is still effective at escaping danger or in attempts to relocate closer to home in hopes of a norma. Additionally, it can be used in successive turns at higher levels in an attempt to repeatedly land on Warp Move panels and increase one's star count, since at these levels the Warp Move panels will stay active for longer periods of time.

Marie Poppo (Mixed)'s base stats give her 50 starting stars and a discount of -25% at shops.

To unlock Marie Poppo (Mixed) as a playable character, along with her unit card and Hyper card as binder collectibles: