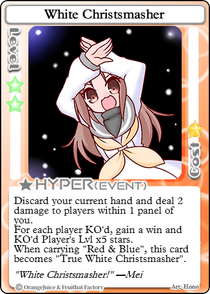 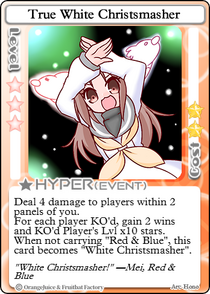 Mei has two Hypers, which will transform into each other depending on certain criteria.

Mei's main Hyper is White Christsmasher. When used, 2 damage will be dealt to all non-KO'd units on the player's current panel except the player. For every unit KO'd by this effect, the player gains 1 win and also gains stars equal to 5x the KO'd unit's norma level. If this card is held by a player who also has

Red & Blue in their hand, this card will transform into True White Christsmasher.
Mei's secondary Hyper is True White Christsmasher. When used, a preview of the card's range will be shown to the player, and the player will be prompted to confirm their card usage. If No is selected, the card will not be used and the player will return to card selection. If Yes is selected, this card's effect will activate. When used, 4 damage will be dealt to all non-KO'd units within a 1-panel radius except the player. For every unit KO'd by this effect, the player gains 2 wins and also gains stars equal to 10x the KO'd unit's norma level. If this card is held by a player who does not also have

Red & Blue in their hand, this card will transform into White Christsmasher.

White Christsmasher is a situational Hyper but can lead to decent rewards. To break even, a player would have to knock down one Level 2 enemy, or two Level 1, making it a very useful card in the late game, were the player to land on the same panel as someone that is low on HP. Another good use can be to knock down any pursuers that Mei has managed to hold off and bring down to 2 HP, shaking them off and getting rewards as a bonus.
Red & Blue is a very important card for Mei, since it allows her to boost her base stats by an important amount enabling her as a more combat oriented character. As such, the player holding this card should be very careful of any discard effects such as

Scrambled Eve. However, these cards are also useful when the player doesn't have this card, to get rid of their current hand and instantly obtaining it. Holding this card will also allow Mei to obtain True White Christsmasher, which is an improved version of her original Hyper card. Thanks to the extra range, this card can be used to take down any risky characters that could bring her down without having the necessity to land on the same panel.