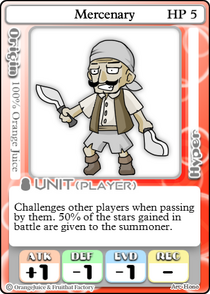 Base Stats
HP
5
ATK
+1
DEF
-1
EVD
-1
REC
-
Passive
Challenges other players when passing by them. 50% of the stars gained in battle are given to the summoner.
Basic Info
Origin
100% Orange Juice!

Mercenary appears in Bounty Hunt Mode as a minion that can be purchased from Taverns, with a base price of 30

. It holds no stars or cards upon being summoned.

Mercenary also appears as an opposing enemy unit on the field as a medium invader in the Knight and Faeries mutator of Chaos Mode.

It has the same stats and passive as in Bounty Hunt Mode, and does not possess a Hyper. Its passive has no effect in this mode, due to invaders not being affiliated with a player.