100% Orange Juice Wiki
Register
Don't have an account?
Sign In
Advertisement
in: Level 1 cards, Gift cards, Cards that cause star loss,
and 3 more 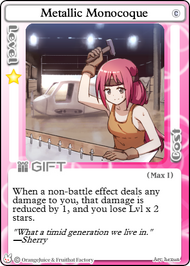 When a non-battle effect deals any damage to you, that damage is reduced by 1, and you lose Lvl x 2 stars.
Level
1 ☆
Cost
0 ★
Limit
1 per Deck
Deck Points

Metallic Monocoque is a collectible Gift card that can be acquired from the Pudding Pack.

Metallic Monocoque is a helpful card for characters that are very susceptible to damage. Characters with low HP pools like Peat and Nanako cannot afford to take much damage outside of combat. Metallic Monocoque helps these characters survive the effects of Air RaidAir Raid
Every 5 Chapters, all units will take 1 damage at the beginning of the Chapter. or cards like

Long-Distance Shot that would otherwise be a huge blow to their survivability. Tsih and Nico can benefit from Metallic Monocoque solely from it being a gift card that doesn't help opponents that much while triggering their passive abilities. Metallic Monocoque is an invaluable card for Miusaki. A single point of damage can be the difference between being invincible in battle and being an easy KO for a bully, so any way she can prevent the loss of HP is well worth the star cost. It's also a great card for Store Manager as this means he won't take any damage for any card that he discards, only that he will lose Lvl x2 stars which actually are not a lot given that the most stars he will lose is 10 stars for 1 damage reduced, and that is a great tradeoff. Metallic Monocoque can also be used to block the damage from effects like

Due to its very specific niche, there are games where Metallic Monocoque simply doesn't do anything due to the cards and characters in the game being unlikely or unable to deal damage. In games such as these, it can become a wasted draw if the player happens to find it. Metallic Monocoque is also a bit less useful for characters with high EVD stats like Suguri, as they are more likely to dodge incoming damage regardless of their current HP. Characters like Marc and Mei who use their hyper cards to deal damage to opponents outside of battle can be at a disadvantage when Metallic Monocoque is in the deck. Iru in particular should never bring this card, as it reduces the effectiveness of many of cards she uses like

Cloud of Seagulls and blocks any shots of

Extended Photon Rifle that happen to target the opponent carrying it.

Metallic Monocoque is widely useful against Co-op bosses, particularly on Hyper difficulty as many level 3 cards exclusively deal non-battle damage. This is most notable for Big the Jonathan with 4 such cards (including Aura of Terror which is fully prevented). It is also useful for Star Devourer (3) and RoPoChi (3), and of small benefit for Big the Haruo (2) and Summer Beast (1).