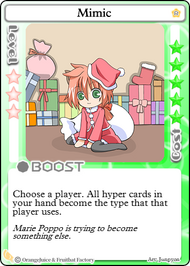 Choose a player. All hyper cards in your hand become the type that that player uses.
Level
3 ☆
Cost
5 ★
Limit
3 per Deck
Deck Points

Mimic is a collectible Boost card that can be acquired from the Mixed Booster Pack.

When used, the player will be prompted to target another player. Upon doing so, all Hyper cards the player holds will transform into the Hyper that the targeted player naturally owns.

Mimic is an excellent card for characters with less powerful or extremely situational hypers. Mimic works best when the player's hyper card is either weak, not usable until high levels, or simply not useful in most situations. It is best to used by characters like Fernet or Tomomo, whose hyper cards are arguably weak or situational. Some characters with event hypers like Marie Poppo (Mixed) and Suguri (Ver.2) still receive benefits if another character copies their hyper, so they can play this card in their deck safely despite having useful hypers. With the right opponent to copy, Mimic can be catastrophic in the right hands. For instance, Kyoko can copy Kyousuke's

Cast Off to become a deadly +3 ATK character. Tsih can use the card to copy Tomomo (Casual)'s

Miracle Red Bean Ice Cream for massive attack boost in conjunction with her passive. There are many different and powerful combinations that would not be possible otherwise. Arthur and Nico can use Mimic to convert their

Rbit Hobby Shops or random hyper cards into much more impactful cards, although they will need to draw Mimic after using

Mimic has two key weaknesses: it requires additional hyper cards to be useful and its strength depends heavily on the characters chosen by the opponents. If the player draws Mimic but is unable to draw a hyper card from the deck, the card is completely useless. It can still be played to quickly remove it from the player's hand but will have no effect if the player has no hyper cards. The player will also likely want to get at least two hyper cards from Mimic, and thus will use their entire hand when the card is activated. This can result in the player discarding useful cards earlier in the game. The character reliance is perhaps the most fickle problem for Mimic. Some hyper cards are not very effective and others only really benefit certain characters. If for instance, the player is up against QP (Dangerous), Kae, and Sweet Breaker, the player will have little point to using the Mimic at all.

Melting Memories are all much more powerful for their original character than the rest of the roster. Consequently, if the character is using a character with an arguably strong hyper such as

Accelerator, the player should not bring Mimic as it will more than likely benefit the opponents more than the player. Certain hyper cards can actually become stronger when acquired by another character, such as