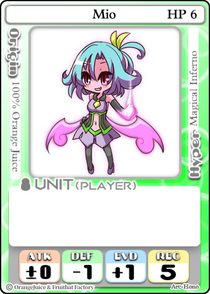 The self-proclaimed "mama" of Tomomo and the one who made her a magical girl, Mio is a smug magical devil, eager to torch opponents just for fun. Mio features a unique stat line, with a high health stat of 6, a slightly below-average defense stat, and a buffed evasion stat. Mio is rather unique in that she is the only character (other than unsoftened Tomomo) with more than 5 HP and a positive evasion stat, and thus has the advantage of being able to dodge low opponent rolls more easily than similar units, instead of burning through her health supply. Despite this advantage, Mio is generally not favorable for aggression, given her lack of an attack buff. Consequently, the player should usually focus on

Bonus panels and star norma to achieve victory, which will also aid the player in feeding Mio's powerful and extremely expensive hyper,

Magical Inferno. Most advantageous to the player, Mio sports one of the strongest hypers in the game that under the right circumstances can dominate the opponents.

Like all characters, Mio possesses some key flaws. Mio's biggest flaw is that she lacks survivability and can be bullied easily by opponents. Even with her 6 HP pool, her negative defense does little to protect it. Opponent battle rolls of 5-6 will likely take a substantial chunk of her HP in each hit. Likewise, her +1 EVD stat is fickle. The minor evasion buff encourages dodging but is unlikely to protect her from high rolls and may cost the player precious health points if they roll poorly. As a result, Mio's hyper is often more likely to be spent recovering the stars the opponents have beaten out of her. In general, Mio needs her hyper card to make any kind of "power play", as her stats do not enable her to.