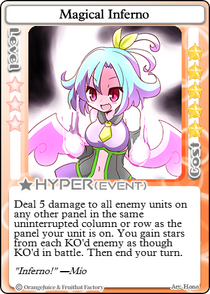 Deal 5 damage to all enemy units on any other panel in the same uninterrupted column or row as the panel your unit is on. You gain stars from each KO'd enemy as though KO'd in battle. Then end your turn.
Hyper Info
Effect Type
Event
Level
3
Cost
50 ★
Symbol
[[File:|30px|link=]]
Illustrator
Hono
"Inferno!" ―Mio

In Co-op mode, Mio's stats and passive do not change.

Mio's Hyper, Magical Inferno, has a different effect in Co-op. When used, all enemies in the same uninterrupted column or row of panels as the player will instantly receive 5 damage. (In all other aspects, this Hyper functions similarly to its Normal mode counterpart.)

Mio's passive and Hyper are unchanged in Bounty Hunt mode.

Mio's base stats give her 36 starting stars and a markup of +10% at shops.