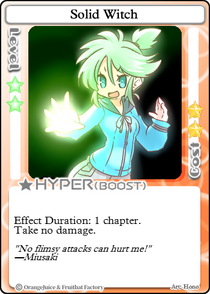 Miusaki's Hyper is Solid Witch. When used, the player will not take damage from any damage-dealing effects for 1 chapter.

Solid Witch is a powerful Hyper card that enables the player to avoid taking any damage for 1 chapter. Consequently, the card can be used for a mixture of both defensive and offensive purposes. For instance, the card can be used when the player is low on HP and is either approaching or being chased by a high ATK character such as Tomomo or Star Breaker. The Hyper's activation will either force the opponent to pass the player or take the risk of attacking the player while invincible to stay behind them. The card can also be used to protect the player from

Boss panels in the late game, especially if HP is low. In addition, the Hyper makes a great counter to any opponents' threatening Hypers. Given the protective qualities of Solid Witch, it can also be used offensively. If multiple opponents are on the same panel nearby, the player can activate the Hyper and fight all of the opponents with virtually no risk of being KO'd. Solid Witch can also be used as a vicious combo with

Final Battle, with the former enabling the player to deal 2 rounds of risk-free damage and the latter ensuring the user will win the fight no matter what.

However, Solid Witch is not an invincible barrier. Arguably one of the Hyper's greatest disadvantages is that unlike most protective Hypers such as

Stealth On, its duration is extremely short. Subsequently, opponents behind the player can just wait for the effect to end, and if the player is trying to use it offensively, they may fail to roll high enough to reach their target. Thus, if the player fails to time the Hyper well, it can easily go to waste. Another issue with Solid Witch is that it does not protect the player from everything. The Hyper can only block damage dealt in combat or cards that deal damage outside of combat. Cards that instantly KO a player and cards that change the target's HP directly still penetrate through the shield granted by the Hyper.