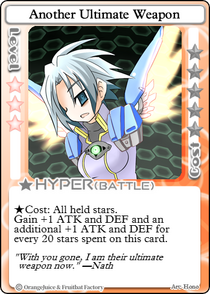 Gain +1 ATK and DEF and an additional +1 ATK and DEF for every 20 stars spent on this card.
Hyper Info
Effect Type
Battle
Level
3
Cost
All held ★
Symbol
[[File:|30px|link=]]
Illustrator
Hono
"With you gone, I am their ultimate weapon now." - Nath

Another Ultimate Weapon is one of the most potent Hypers in the game, able to deal massive damage at the highest star price possible. The Hyper itself enables Nath to easily reach the maximum of +9 ATK and DEF, even surpassing the damage possible with

Accelerator. Unsurprisingly, the Hyper can be very useful for dealing excessive damage to KO an opponent or Boss with a large number of stars.

As a result of the high price on the Hyper, care should be taken to use the Hyper at the opportune moment. Often the Hyper's best use is during norma level 3, as the player will be able to recover faster from losing 30-60 stars as opposed to 120+ stars. However, within the right conditions, if the opponent has an exorbitant amount of stars, the Hyper can be used to steal enough stars to recoup the price. Generally, as a result of the stat limit, there is little use to using more than 180 stars. The player can also increase damage output and reduce the star cost by having 3 stocks of Active Extensions. Also, since the Hyper is a battle card, the player can enter battle with 2 stacks of Active Extension, and begin combat with 3 stacks when the card is activated.

While overall an extremely strong Hyper, the obvious drawback is that it is one of the most expensive cards in the game. Unlike other Hypers, Another Ultimate Weapon cannot be comboed well with

President's Privilege, as this will only cause the minimum of +1 ATK and DEF due to the Hyper's effect being dependent on spending stars. The Hyper is also perhaps one of the most susceptible cards to

Shield Counter, all of which will completely waste Nath's stars.