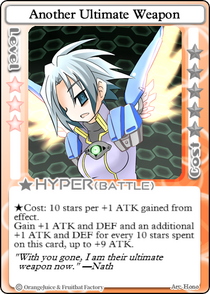 Gain +1 ATK and DEF and an additional +1 ATK and DEF for every 10 stars spent on this card, up to +9 ATK.
Hyper Info
Effect Type
Battle
Level
3
Cost
10 stars per +1 ATK gained from effect ★
Symbol
[[File:|30px|link=]]
Illustrator
Hono
"With you gone, I am their ultimate weapon now." ―Nath

In Co-op mode, Nath's stats and passive do not change.

Nath's Hyper, Another Ultimate Weapon, has a different cost and effect in Co-op. When used in a battle, the player gains +1 ATK and +1 DEF, as well as an additional +1 ATK and +1 DEF for every 10 stars spent on this card. Unlike its Normal mode counterpart, the Hyper will not necessarily consume all held stars, but instead consumes 10 stars for each +1 ATK that the player can gain.

Nath's passive and Hyper are unchanged in Bounty Hunt mode.

Nath's base stats give her 50 starting stars and a discount of -25% at shops.