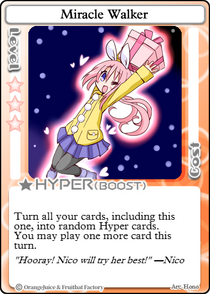 Turn all your cards, including this one, into random Hyper cards.
You may play one more card this turn.
Hyper Info
Effect Type
Boost
Level
3
Cost
0 ★
Symbol
[[File:|30px|link=]]
Illustrator
Hono
"Hooray! Nico will try her best!" ―Nico

Nico's Hyper is Miracle Walker. When used, the player will discard all cards in their hand, and replace them with an amount of random Hyper cards equal to the number of cards that were discarded. These Hyper cards will be randomly selected, and can be any Hyper in the game, barring Hypers that can't be normally obtained in the hand. The player is then allowed to play 1 additional card on the same turn.

For the purposes of this card, the number of cards the player has in their hand is determined before Miracle Walker is removed from the hand, meaning the Hyper itself is counted.

Despite the card's wording, this Hyper does not transform cards, instead discarding them before generating random Hypers equal to the amount of discarded cards. Due to this, when any of the generated Hyper cards are used or discarded, they are removed from the game rather than being sent to the discard pile.

Miracle Walker is a very luck-based Hyper, depending on chance to get a beneficial Hyper for the current situation. The best time to use it would be when the player has a full hand with >4 cards to get the most out of the conversion. There is not much risk to playing this card if the player is Nico, as any potentially detrimental Gift-type Hyper cards will not apply their effect due to her passive, and will instead allow Nico to gain more stars. However, this risk is very present if the player is any other character.

Plushie Master can let the player amass a great amount of stars or lower enemy HP safely. The player can also easily trigger combos between different Hypers, such as activating

Awakening of Talent in battle to guarantee a natural 10 roll.

Another Ultimate Weapon). It's generally better to get a full hand of cards before using the Hyper in order to get more chances for a good Hyper, which can be difficult to achieve on maps with