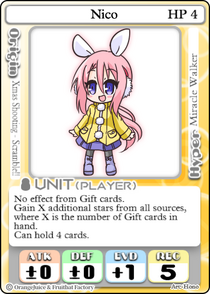 Nico (ニコ Niko) is one of the playable Characters in 100% Orange Juice!. She was added to the game in DLC 19

Nico is a wild card character that has a couple of neat passives in her favor. The first being her ability to nullify Gift cards and earning extra stars while holding them. While this passive is inherently capped at 4 extra stars due to her hand limit, it's also more difficult to attack her hand than it is to attack Arthur's Hobby Shops. Her ability to hold 4 cards boosts her ability to gather bonus stars from hoarding Gifts, as well as her ability to use Miracle Walker to obtain a handful of random Hypers. Nico should aim for a Star norma, as powerful combat Hypers are rare to obtain and expensive to use, often ending without results due to her lackluster stat spread.