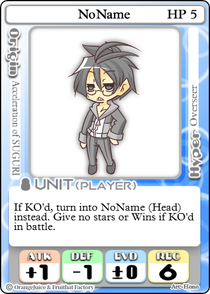 Base Stats
HP
5
ATK
+1
DEF
-1
EVD
±0
REC
6
Passive
If KO'd, turn into NoName (Head) instead. Give no stars or Wins if KO'd in battle.
Basic Info
Origin
Acceleration of SUGURI 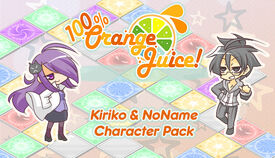 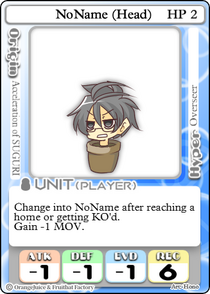 NoName and NoName (Head) (NoName) (NoName(Head)) are two of the playable characters in 100% Orange Juice!. He was added to the game in DLC 11

, alongside Kiriko. He plays as a single dual-character. NoName originates from the game Acceleration of SUGURI X-Edition, in which he was the main antagonist of the Falling Wonder campaign. He is a robot that looks identical to his creator Shifu.

NoName is a relatively balanced character, similar to Hime, with an average health stat, a slightly buffed attack stat, and partially reduced defense stat. While not particularly powerful in any stat, NoName features enough attack power to take down

Encounter panels and his health provides a decent amount of protection from incoming attacks. NoName's true power, however, stems from his passive ability which, like a robot, makes him rather difficult to KO. NoName essentially is given a second life upon initially being KO'd. The player will revert into his (Head) form, which can buy the player just enough time to either revert back to his initial form or draw a Hyper to survive even more chapters. This can be especially useful as it can help NoName survive almost indefinitely if the player can get to a

Home panel to make him whole again, and use healing cards such as

Pudding to set up another health barrier. The player can also enjoy the benefit from being relatively safe from the Bosses and immune to powerful Hyper cards like

Another Ultimate Weapon upon initial encounter. Like Miusaki, NoName's passive forces the opponent to do at least two battles in order KO NoName. He also has a powerful Hyper for the late game that puts almost every player into more danger than himself, and can completely ruin the game for opponents seeking wins.

Even with his powerful passive, NoName is far from un-KO'able, a possess a harsh trade-off. From the start, NoName features a slightly debuffed defense stat which lowers his durability for prolonged combat, which makes wins norma and combat inadvisable unless in his favor. A short amount of combats can quickly reduce NoName to his (Head) form. His passive also usually only acts as a way to keep him alive for one more chapter. However, once NoName has been reduced to (Head) form, he has extremely poor stats and a debuffed movement. The combination of both of these will likely result in an easy KO for pursuing opponents, as he cannot fight well or run away quickly. Even

Encounter panels become a risk as a roll of 5 or higher from an opponent can easily defeat NoName (Head) if the player rolls poorly for defense. The player will also then be punished harshly for being KO'd with a 6 recovery stat, often resulting in 2-3 chapters of downtime before the player can get back in the game.

NoName should more often than not try to aim for the star norma and play passively unless the opportunity to attack a weak opponent presents itself. When possible, the player should try to use the boss to their advantage, letting it do most of the damage to opponents so NoName can pick them off. In the early game, the player should focus on

Bonus panels specifically as preserving NoName's health and preparing for the later game are essential to his success.

Pros
+Positive ATK and a decent amount of HP in the first form
+Powerful passive effect that not only helps you protect your stars, but also allows you to attack others more safely
+Hyper that deters opponents from attacking you and can also potentially set them back
+Good synergy between the Hyper and the passive effect
Cons
-Low DEF. Extremely terrible stats in the Head form
-Hyper is very expensive and also requires having the Boss on the field
-Passive effect triggers on every KO, no matter what, which—along with the increased REC—can significantly slow down NoName, especially at the beginning of the game