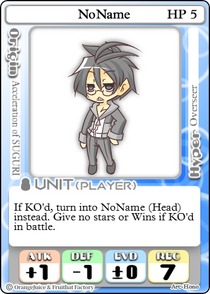 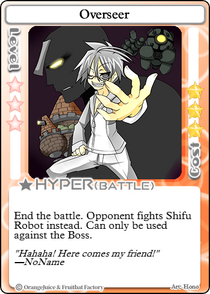 In Co-op mode, NoName's REC stat is increased from 6 to 7, due to his base ATK of +1. The REC change is not shown on NoName (Head)'s unit card, but still applies to both of his forms. NoName's passive does not change.

NoName's Hyper, Overseer, is changed into a Battle type card and has a different effect in Co-op. This card can only be used in a battle against the Co-op boss. When used, the battle will instantly end. In addition, the opponent will enter a battle with Shifu Robot (Boss). Shifu Robot will be on either the attacking or defending side of battle, depending on which side the player was on.

NoName's passive and Hyper are unchanged in Bounty Hunt mode.

NoName's base stats give him 38 starting stars and a markup of +5% at shops. Despite having weaker base stats, NoName (Head) has the same markup as NoName.