100% Orange Juice Wiki
Register
Don't have an account?
Sign In
Advertisement
in: Level 2 cards, Event cards, Base pack,
and 2 more 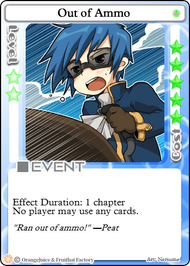 Out of Ammo is a collectable Event card that can be acquired from the Base Pack.

When used, all players will be unable to use cards for 1 turn.

Cards allow players to increase their survivability, mess with opponents, and many other things. Out of Ammo effectively denies players this privilege, forcing them to rely solely on their base stats and passive abilities in combat. Characters with base stats that favor battle like Suguri or Tomomo can play this card to prevent weakened opponents from using battle card to defend themselves. As such, Out of Ammo is an effective counter to characters with powerful battle card Hypers like Peat. If an opponent lands on the player's home base, particularly ones with trap Hypers like Saki or Chicken, the player can use Out of Ammo to prevent them from laying a trap there. The Cuties can play this card in their deck as a cheap event card to gain stacks of Events Crashed.

As mentioned above, characters with battle card Hypers should avoid Out of Ammo. Alte and Syura in particular are affected by this, as the most efficient time for them to play

Beyond Hell are when they are low on HP. Being hit with an Out of Ammo after preparing a bait and switch with their Hypers is extremely devastating. Characters who are lacking in combat abilities should also steer clear of this card, as it can be dangerous when used against them and they usually have little use of it themselves.