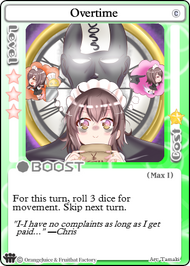 0
Symbol
30px
Illustrator
Tamaki
Common Card
Community Pack 3
"I-I have no complaints as long as I get paid..." —Chris

Overtime is a collectible Boost card that can be acquired from the Community Pack 3.

Upon use, the player will roll 3 dice for all movement rolls that turn, including rolls from

Warp Move panels. The player's following turn will then be skipped.

This card is similar to

Dash! in that it gives extra dice for movement. As such, most strategies that can be used with

Dash! will also work with this card.

Dash!. The first application is that you avoid a panel compared to

Dash!, which is mainly useful on fields that have a lot of negative panels such as Tomomo's Abyss. The second application is using the card to catch up to a fragile character like Kae for an easy KO. If the user does manage to KO them, and they get up the next turn, the turn skip allows the user to be behind their target again for another potential KO. It should be noted that this only works if the target recovers in one turn, otherwise the user is still forced to roll ahead of their target.

Overtime gains 2 extra dice this turn but loses a dice next turn, so the card gives a total of one extra dice, which is the same as

Dash!. However, it has a higher star cost and norma requirement, which can make it less useful, particularly for characters aiming for star normas.

Overtime ends up being mostly useful on bully characters like Yuki, Tomomo, and Star Breaker who appreciate the increased chance of catching their target compared to

Dash! and can use the turn skip to their advantage, or characters that synergize well with movement cards in the first place like Halena and Lone Rider.