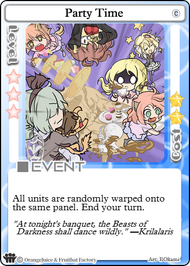 All units are randomly warped onto the same panel. End your turn.
Level
3 ☆
Cost
20 ★
Limit
3 per Deck
Deck Points

Party Time is a 3-star event card that causes all units to warp to the same random panel. The user's turn then ends, allowing them to move after each other unit. The panel is also marked with confetti for cosmetic purposes.

Party Time is a powerful re-positioning card for offensive players that lets them corral all of their opponents together in order to take them out via combat or by other means. Although Party Time does prevent the user from doing anything else that turn, this is a blessing in disguise. Skipping their movement allows the player stay behind their opponents, giving them their choice of who to attack on their next turn. Characters that excel at combat and prefer to obtain wins like Kai or Sora can easily capitalize on this card to potentially KO many of their opponents. Mei can also benefit from this card, although more so when one of her opponents plays it. Having all of her opponents on one panel allows her to use

True White Christsmasher to great effect, but playing Party Time herself will allow her opponents to escape before she can play one of them.

Since the warp is random, there are times when it will allow opponents to escape via nearby

Move panels. Even high movement rolls can make it difficult for the player to fight their opponents while they are clustered together. Since each other player has a chance to act before the user can attack, this card can be countered by cards like

Dash! or even another Party Time. Bullied characters such as Marie Poppo or Aru should not put this card in their decks, as they will have a tough time surviving if surrounded by their opponents. Their poor defenses will make them prime targets for the other players. Tanks such as Fernet or Nanako also risk taking a lot of damage despite their high defenses due to the potential for repeated attacks from their opponents.