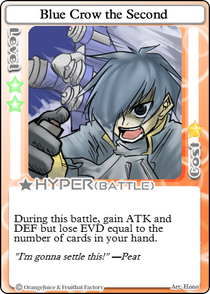 Peat's Hyper is Blue Crow the Second. When used, the player gains ATK and DEF but gains -EVD equal to the number of cards in the player's hand.

For the purposes of this card, the number of cards the player has in their hand is determined before Blue Crow the Second is removed from the hand, meaning the Hyper itself is counted.

Blue Crow the Second is a powerful, stat-boosting Hyper that provides a large boost to attack and defense at the cost of evasion. The additional stats are added based off the number of cards in the player's hand at the time of activation. The Hyper does count itself before use, thus if the player has no other card, the Hyper has a minimum gain of +1 attack and defense and lose 1 evasion. The Hyper can be used both offensively and defensively, but care must be taken, as the drop in evasion combined with Peat's low health necessitates using defense against enemy attacks when the Hyper is active.

The Hyper itself enables Peat to easily overpower most opponents and is an excellent tool to protect Peat's small health stat. As the effect scales with the number of cards in the player's hand, it's advised to continually draw cards throughout the course of the game, for maximum effectiveness. Ideally, the player will have a full hand of cards, however under specific conditions, the Hyper can be activated with a hand of 4, giving the player a massive gain of +4 attack and defense and -4 evasion. The Hyper also benefits from it's cheap star price and low activation level.

The main downside to this Hyper is that relies heavily on the presence of cards. A full hand can be easily attained against opponents like Aru or on Boards with MiracleMiracle
Every 5 Chapters, all

Double panels accordingly. This effect lasts for the duration of the Chapter., but can be stifled by cards that cause Peat to discard cards such as

Scrambled Eve. The other more obvious pitfall too the Hyper is the loss of evasion, which can result in KO if Peat is low on health and fails to KO the opponent.