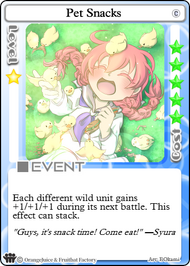 Each different wild unit gains +1/+1/+1 during its next battle. This effect can stack.
Level
1 ☆
Cost
5 ★
Limit
3 per Deck
Deck Points 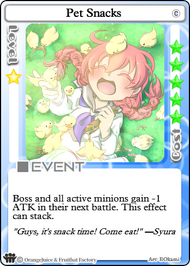 Boss and all active minions gain -1 ATK in their next battle.
Level
1 ☆
Cost
5 ★
Limit
3 per Deck
Deck Points

Pet Snacks is a collectible Event card that can be acquired from the Community Pack 3.

Upon use, grants one of each "wild" unit that can show up in

Encounter panels +1 to ATK, DEF, and EVD. This effect can stack many times as Pet Snacks is used. Once a "wild" unit with Pet Snacks stocks is battled, all stocks for that unit will be reset, making that unit return to its original stats, barring HP.

Being cheap and versatile, Pet Snacks is a card which has many applicable uses, being a way to make

Encounter panels more dangerous, as well as staple in many tank decks.

For the purpose of disruption, this is a very cheap option, being only 5 stars. If the player desires, Pet Snacks can turn

Encounter panels into a sort of trap. The Seagull enemy becomes even more fearsome with just one activation of this card, allowing for a potential KO, or massive damage, with its +2 ATK. This can also be useful when trailing behind an opponent, as many fields have

Encounter panels which can not be avoided through pathing, and the damage a wild unit might do to them will make KO'ing more likely.

When playing "tank" characters, such as Fernet and Kyoko, Pet Snacks can be quite useful. Due to these character's unlikelihood to take more than 1 damage when fighting wild units, they often won't mind buffing them. In fact, it is beneficial to have stronger wild units, to make the board state more threatening for high ATK bully characters like Tomomo, who otherwise often KO

Encounter enemies with ease. Furthermore, Pet Snacks can be used as a way to dissuade bully characters from farming wins off these panels, in order to slow their progression towards Norma victory.

Tequila shines the most with this card in his deck, as not only does his passive bring wild pirate minions to the board, so does his hyper. Pet Snacks will buff both his passive minions, and the minion spawned by his hyper's trap card,

Flying Pirate. Due to the fact that Tequila's own pirate minions challenge him, and buffing his pirate minion creates danger for opponents, Pet Snacks is highly valuable to Tequila's arsenal.