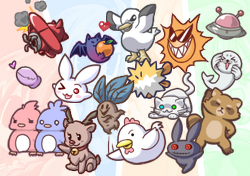 Pets are optional cosmetic items that stand alongside the player's character and follow the player during a match. They each have a unique set of poses to match the playable character's poses. Pets are unique among cosmetics in numerous ways. They are the only cosmetic that the player can receive duplicates of, as well as the only cosmetic to utilize the Steam Inventory, allowing them to be traded among players and sold on the Steam Marketplace.

Pets are primarily obtained through the Arcade by using

Pets are represented in the cosmetics menu with a

The type of pet that can be won depends on which Pet Catcher is used. A pet's rarity determines how likely the pet is to be won from its respective Pet Catcher.

Each icon below links to each pet's respective Steam Marketplace page.