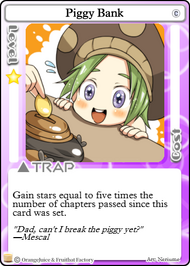 Gain stars equal to five times the number of chapters passed since this card was set.
Level
1 ☆
Cost
0 ★
Limit
3 per Deck
Deck Points

Piggy Bank is a 1-star level trap card that is any star collector's best friend and as a result, a very popular choice for tank characters. Upon setting the trap, the star reward inside the bank will grow by 5 stars every chapter until the card is triggered again.

Piggy Bank is one of the best trap cards in the game with essentially no drawbacks for whoever lands on it. In 10 chapters alone, the card will have already accumulated a massive 50 stars and since the card is a very low norma card, the player can set the trap very early in the game. The only challenge the player will face with Piggy Bank is where to place the card in order to keep it safe. To ensure they are the one who triggers the trap, many players place the trap on their own

Home panel as they know it will guarantee they can stop on the panel whenever they desire. However, this is an immediate red flag for many opponents, as the player is unlikely to mark their own home panel with a trap that isn't beneficial to them. As a result, the best strategy is generally to play mind games with the opponent by either placing the trap on a random panel or place it on an opponent's home panel. By placing it on a random panel, players will generally try to automatically bypass the minor inconvenience, and when placed on a home, they will think it might be deadly. As a result, Piggy Bank can be particularly vicious in the hands Saki who can easily confuse other players by placing a Piggy Bank on their home after norma 3, resulting in them fearing it's her dreaded

As one might expect, Piggy Bank's strength as a trap card is also its greatest weakness. With its power to amass stars quickly, the card can spell disaster if triggered by the wrong player, and thus the player wants to keep its identity as a rewarding card hidden. A player in the lead or far in last may choose to "bite the bullet" and land on a panel regardless of the trap and receive the huge supply of stars the meant for themselves. Or in a similar scenario the player may have to choose between landing on either the trap or a

Drop (x2) panel, in which case they will probably choose the former. The player may also have difficulty landing on the panel that has the Piggy Bank if it is not on their home. The card also isn't very ideal for certain boards. Large boards like White Winter where there are lots of panels and split paths are excellent for the trap while very compact boards like Vortex and few path options like Highway Heist make it more difficult for the player to protect the trap. Lastly, the card is susceptible to

We Are Waruda which will scramble its position and make it even harder for the player to ensure they land on.