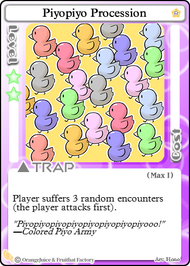 When used on one's home, Piyopiyo Procession is a great tool for offensive characters to gain some easy Wins. It can be especially helpful when when a Boss EncounterBoss Encounter
When Norma level 4 is achieved for the first time by any player, all

Boss panels. While Boss Encounter is in effect, any player who stops on a Boss panel will battle the Boss unit. This event will continue until the Boss unit is defeated. is active, as they make it impossible to farm

Encounter panels. As the victim attacks first on all three encounters, this card benefits characters with high attack stats like Yuki and Tomomo, as they can usually one-shot the summoned mob for easy wins. It also doubles as a source of damage against weaker opponents like Marie Poppo, potentially KOing them or forcing them to use valuable battle and recovery cards.

Due to the player needing to set the trap, then land on it in order to get full benefit from it, Piyopiyo Procession can be an unreliable card. It is entirely possible for an opponent to trigger the trap before the player has a chance to reap the benefits. In addition, bad luck in combat can cause the player to fail to gain any wins or cause a weak opponent to escape unscathed. The fact that the NPC that shows up each time is random can also wildly affect the outcome. Robo Ball can be hard for most characters to KO and Seagull has by far the most potential to deal high amounts of damage to the player if it survives. Even Chicken can sometimes pull a lucky dodge out of nowhere.