Minigame panels across the board once every 5 turns, and landing upon one triggers a minigame for the player to play. The panels can appear on any panel other than

Home panels and will overwrite the effect of the panels they replaced upon appearing. There are a total of 9 possible minigames triggered by this panel, and each game features special cards that grant the player an effect or reward upon completion, as seen below.

For the Match 2, Track the Card, and Spin the Wheel minigames, the player is simply able to choose which effect they want to receive. However, for the Whack a Poppo, Poppo Shooting, Poppo March, Saki's Bakery, Peek-a-Shroom, and Marc's Flight Training minigames, effects are split into categories of "good effects", "neutral effects", and "bad effects", receiving a good effect after doing well at the minigame or a neutral/bad effect if the minigame is done poorly, depending on the player's performance.

Track the Card is a classic card minigame similar to Match 2. When the player enters the minigame, they will be presented with 4-6 cards. The cards are shown face up for roughly 2 seconds and then flipped face down. The cards then scramble at a steadily increasing speed for around 6 seconds. The player will then need to pick a single card from the resorted cards, and they will receive the effect of whichever card they draw. The player's performance in this game is purely based on the skill of the player's eyes, as the last second of the game is the most difficult to keep track of. No matter the amount of cards, the game is challenging, as more cards result in more distractions from the player's card, and less cards result in the cards moving more since there are fewer of them. 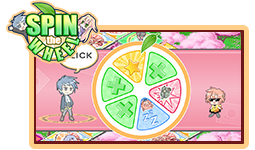 Spin the Wheel is another minigame that plays exactly as it sounds. When the player enters the minigame, they will be presented with a wheel that features 4-8 card effects listed on it. The player will have 10 seconds total to stop the wheel or the game will automatically stop it. The effect under the leaf when the wheel stops will be the one the player receives. Wheels come in 3 different speeds that determine when the player's click will register relative to the pointer leaf at the top of the wheel. The player should try to recognize the speed in the first 5 seconds of spinning and then use the proper action based on it (The rules apply for all wheel sizes) 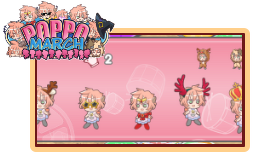 Poppo March is a minigame featuring many different Poppos with various accessories equipped. Three unique Poppos will be shown at the start of the minigame, and the goal is to click on the Poppos wearing the correct accessories as they march past. The player only has 3 clicks to accomplish this with. The higher the player scores, the more likely they are to receive a good effect.

Poppo Shooting is a dart-throwing game where balloons must be shot with darts. Darts are shot from a fixed position on the player's sprite. Balloons with symbols signifying good effects will float up, and 3 balloons with the same symbol must be popped to receive the effect. The player only has 6 darts to throw in order to accomplish this. If time runs out or if all darts are thrown without popping three balloons with matching symbols, the player will receive a neutral or bad effect.

The game will end after enough objects on the screen have fallen. If the player controlling Saki loses all 3 lives, the game ends there. Finishing the game with extra lives will award 50 points for each life, up to 150 extra points. The higher the player scores, the more likely they are to receive a better effect.

Peek-a-Shroom is a memory minigame featuring mushrooms from the SporesSpores
Every 3 chapters, spawns mushrooms on the field, which give free cards with random effects when picked up. event. Mushrooms will slide across the screen in 3 rounds. For each round, the player is then tasked to click the mushroom images in the order they appeared on screen. Each round gets harder, with the hardest being the final (Round 3). The rounds are as follows:

If the player incorrectly orders a mushroom, they will lower the possible score and forfeit that round. The player also loses the round if time runs out before all mushrooms are ordered. The higher the player scores, the more likely they are to receive a better effect.

Marc's Flight Training is a simulated computer flying minigame where the player must fly a plane to the end of a map while avoiding obstacles. The obstacles are two colors of walls, which the player avoids touching by controlling the plane on screen, using their mouse as an analog stick (visualized by the red dot in the center). Score is accumulated over time by flying through the course. The player is given 3 lives, and 1 life will be lost for any obstacle that is flown into. Although the player does not get a score bonus at the end for any remaining lives, losing a life temporarily halts score gain for a short while, consequently affecting the final score. Once the end of the course is reached, or all 3 lives are lost, the minigame ends. The higher the player scores, the more likely they are to receive a better effect.