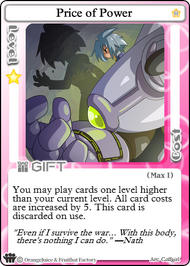 While useful to some, Price of Power's main disadvantage is that it can be completely useless to others. Characters with low-level hypers do not need the card at all, and with the exception of Tsih and Nath, most players that start with the card on chapter 1 will often discard it quickly to prevent it from draining more stars from them when they choose to use a card. The card also becomes virtually useless once the player reaches norma 4, since only one card in single player mode,

Sealed Guardian, and the 4 role specific hyper cards in Co-op mode naturally requires level 5 to use.