< QP
Edit
It has been suggested that this article or section be merged with QP/Strategy. 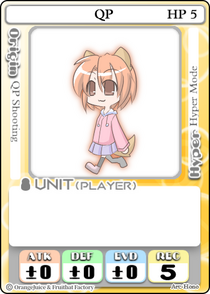 In Co-op mode, QP doesn't change at all, as her recovery stat does not rise nor does her hyper price or effect altered.

As a result of her hyper, QP can be a half-decent attacker, as at max level the player will be able to have a +4 stat when using her hyper. Her HP pool should enable the player to last quite a few combats as well, before her likely KO as a consequence of her neutral defense and evasion stat. Overall she does not stand out as an attacker but can still be reasonably viable as one.

Similar to the attacker role, QP can be a competent guardian, thanks to her health pool and hyper. Her average health will enable her to cast a fair number of shields for her allies before KO. She can also use her hyper to both self-KO and deal some damage in the process and then be ready to start shielding allies immediately after KO. The player will also receive an additional defensive boost by using the role and thus increase QP's survivability.

Supporter is not a great matchup for QP, as she doesn't have any heavily increased stats on her own to keep her alive, and she will not receive any attack or defense buff as a supporter. While the role does provide a +1 evasion boost, it will not increase the player's survivability much during the late game, and the player will suffer from QP's lack of damage output.

Avenger can be viable for QP thanks to her average HP pool, but the role is not well-supported by her neutral defense stat. The role also works relatively well with her hyper. If she is KO'd before her turn to attack, she will revive on the next turn, and if she isn't KO'd, the player will have an even higher bonus toward her attack stat to deal damage.