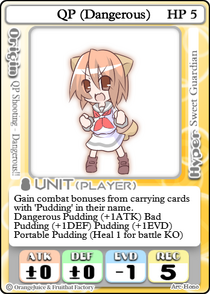 Theme
▶️
For the alternate version of this character, see: QP

QP (Dangerous) (きゅーぴー (Dangerous) Kyūpī (Dangerous)) is one of the characters in 100% Orange Juice!. She is available as a playable unit for owners of QP Shooting - Dangerous!!

(Each stat boost is indicated by

icons near the player sprite, similarly to the AmplifyAmplify
Every 6 Chapters, all players will randomly receive a +1 bonus to their attack, defense, or dodge stat (marked by a symbol). This effect lasts for 2 Chapters.

More aggressive than her usual self and ready to save her pudding, QP (Dangerous) is a heavily modified version of QP centered completely around a unique passive. Like QP, QP (Dangerous) possesses an above-average health stat of 5, a neutral attack and defense stat, and a neutral recovery, but has a debuffed evasion stat. These stats provide QP (Dangerous) with no natural advantages other than hp to survive and her decreased evasion, unfortunately, results in more difficulty dodging low roles. Subsequently, her natural performance will be solely dictated by the player's luck with their dice roll. Her passive, however, enables the player to change this. When holding any card with “pudding” in its name, the player will receive a stat buff. This a very unique effect in that it enables QP (Dangerous) to adapt to any scenario. In a room full of aggressive opponents, the player can try to get 2

Portable Pudding to turn QP into a tank with +2 defense and 6 hp or in a room full of fragile characters, the player can do the opposite with 3

Dangerous Puddings to crush opponents with a +3 attack stat. Or more simply, the player can take a balanced approach by trying to collect 1 of each. Much of this will be based on the player's draw luck, however, QP (Dangerous) hyper also enables the player to power up quickly or switch their strategy midgame which can be very useful.

The inherent downside to QP (Dangerous) is her passive itself. While the ability to hold cards and gain stat advantages is extremely advantageous, it is also a great hindrance to more complex strategy. The player will need to rely solely on stats as opposed to any greater card combo strategy. Like a gift card, “pudding” cards must be held to keep the stat boost, and thus, to maximize the passive, the player will want to have as many in hand as possible. However, in doing so, the player will limit what cards are in their hand. For instance, an attack or defense stat of +3 is incredible and only equaled by Tomomo (Sweet Eater) and Kyoko, but in order to achieve this, the player will need to have a hand full of

Bad Pudding. Having either hand will provide the player with zero protection from opponent retaliation and card/hyper combos, as the cards are traps, not battle cards. Likewise, rather problematically, the best utility cards are some of the worst for QP (Dangerous).

Portable Pudding are critical for keeping a unit alive in the late game, but the former adds to QP (Dangerous)’s evasion stat, which isn’t really worth it, given its negative starting value. In contrast, the latter has an excellent hp boost effect but is limited to 1 per player deck, which renders the player less likely to draw it. Another issue is that given that both Bad Pudding and Dangerous Pudding are traps, they can easily be used against the player, with Bad Pudding possibly resulting in the player dropping an important “pudding” card.

QP (Dangerous) is an unusual case in that what strategy approach the player takes will likely depend on the cards the player draws early on. The player will likely want to focus on stars norma and

Bonus panels due to her neutral stat.

Draw panels and “pudding” cards can then further affect the player's choice. If the player draws defense and evasion boosters, then stars norma will likely be the best option. However, if the player draws at least 1 bad pudding, then the player may want to change their strategy to wins norma and focus on

Pros
+ Her passive gives her great stat flexibility, allowing her to fit any playstyle.
+ Her hyper allows her to get pudding cards in her hand quickly to trigger her passive.

Cons
- Vulnerable in the early game due to her mediocre base stats.
- Reliant on draw spaces to get pudding cards and hypers in her hand.
- Low base EVA makes not taking damage difficult.