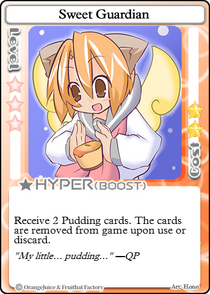 In Co-op mode, QP (Dangerous)'s stats and passive do not change.

QP (Dangerous)'s Hyper, Sweet Guardian, has a different effect in Co-op. Upon use, two copies of

Pudding will be added to the player's hand. When any of the generated cards are used or discarded, they are removed from the game rather than being sent to the discard pile.

QP (Dangerous)'s base stats give her 44 starting stars and a discount of -10% at shops.