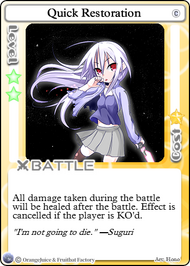 All damage taken during the battle will be healed after the battle. Effect is cancelled if the player is KO'd
Level
2 ☆
Cost
10 ★
Limit
3 per Deck
Deck Points

Quick Restoration is a 2-star battle card that gives the player the opportunity to recover from battle damage. Upon activation, if the player survives the battle, all damage taken during the battle will be healed.

Quick Restoration is an excellent healing card for a player either expecting to receive a heavy hit or one trying to preserve their low health while being pursued. The card itself is unique in that it is one of only two battle cards that heals (and cheaper than the alternative,

Portable Pudding), which gives the player the advantage of not having to use a boost or event card at the start of the turn. As a result, if the player is lucky, they can use a card such as

Dash! or a hyper to either escape or KO the opponent the next turn. One of the key advantages of Quick Restoration is that it can potentially heal as much as

Pudding at a lower norma level and heal more than

Dinner without healing the other players. As a result, the card is often best put to use on characters with a large pool of HP but poor defense stats to preserve it such as Arthur, Poppo, Krilalaris, and Flying Castle among others. However, the card is still a popular choice with tank characters that often take little damage such as Kyoko and Fernet, since it can help keep their HP full after surviving a powerful attack or just keep them alive a bit longer. The card also carries the advantage of being both offensive and defensive. Unsurprisingly, defensive is the more popular of the two strategies, however, the card may be effective in the hands of a bully character such as Yuki if the player fears heavy retaliation. That said, the card is not advised in bully character decks, as it will more often than not benefit the opponent more. The card is also a good choice for certain characters that the player will want to keep alive for as long as possible to preserve their passive abilities, such as Nath and Tomomo (Sweet Eater), who will lose their power if KO'd.

Due to the unpredictable amount of health the player will receive from Quick Restoration, the card is far from ideal. Quick Restoration is the only healing card that relies on the opponent, and thus, if the opponent rolls poorly, the player may be better off evading or they may only end up receiving 1 HP from the effect. While extra HP is almost never a disadvantage, the player will have basically spent 10 stars to play

Saki's Cookie, which will be rather disappointing. Similarly, if the player rolls poorly, they might get KO'd instead of being healed, resulting in a loss of both the card cost and half their stars. The card is also not very useful for some characters, such as evasion-based characters like Suguri, who are designed to not defend most of the time, and low-HP characters, like Peat, who are more often than not better off with the other aforementioned healing cards.