100% Orange Juice Wiki
Register
Don't have an account?
Sign In
Advertisement
in: Level 2 cards, Battle cards, Base pack,
and 2 more 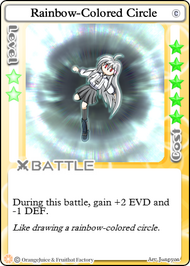 Rainbow-Colored Circle is a collectible Battle card that can be acquired from the Base Pack.

Rainbow-Colored Circle is a low level, low-cost battle card that increases the user's evasion stat by +2 and lowers their defense stat by -1. For an incredibly small trade-off of 5 stars and lowered defense, the cards sole purpose is to aid the player in avoiding all damage from an attack. More specifically, while the player is low on HP or if they expect a powerful attack from an opponent.

The card can be useful for almost any character and is most efficient in a survive or KO scenario. While evasion is a relatively inconsistent stat as a whole that only may save the player, an increase of +2 evasion can go a long way for surviving an attack. While almost all characters can benefit from evasion, some can gain much more from the card than others. Characters such as Suguri and Aru who already have large evasion stats will gain a huge +4 evade and -2 defense stat, enabling them to dodge attacks much more easily. Low evasion characters such as Fernet and Marc will also still be able to gain value from the card, giving them a better chance to evade if the opponent's attack roll is low enough, or for a last ditch effort to survive. When it comes to whether to use the card or not, it usually depends on a survive or KO situation. If the player's HP is low (especially at 1HP), it is almost always a good idea to use Rainbow-Colored Circle. If a high attacking character such as Star Breaker or Yuki is attacking the player and the player is at low HP, the +2 evasion from Rainbow-Colored Circle will greatly increase the player's chance of surviving, and thus grant the player a chance to counter-attack. However, if the player is at full health or the attacker has a low attack stat, it may be best to save the card for a later time. Since the card also grants -1 defense to its user, it should mainly be used when defense isn't a concern and avoiding all damage. This card can also be used to combo alongside

The card is not beneficial in all cases, however. There are some cases where Rainbow-Colored Circle is one of the absolute worst cards for certain characters to use. Tequila, Flying Castle, and Kyoko are prime examples of scenarios where the card should be discarded rather than played. Tequila has the lowest evasion stat in the game with -3 evade. Even if the player were to use Rainbow-Colored Circle, they would be left with 0 defense and -1 evasion, which is not optimal at all in a survive or KO situation. Flying Castle has a little more evade at -2 Evasion, but he also has -1 Defense. The player must be 100% certain that the card is the right play with -2 Def and 0 Evade. Lastly, Kyoko is unable to evade at all, thus rendering the card completely useless to her.