100% Orange Juice Wiki
Register
Don't have an account?
Sign In
Advertisement
in: Level 2 cards, Battle cards, Base pack,
and 3 more 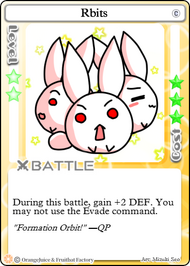 During this battle, gain +2 DEF.
You may not use the Evade command.
Level
2 ☆
Cost
3 ★
Limit
3 per Deck
Deck Points

Rbits is a collectible Battle card that can be acquired from the Base Pack.

When used in a battle, the player gains +2 DEF. In addition, the player becomes unable to use the Evade command.

Rbits is one of the safest and most universally useful defensive battle cards in the game. The low level requirement and star cost combined with an solid +2 defense boost boost means that just about any character can make use of this card in a pinch. Unlike most other defensive cards like

Shield Counter, Rbits can be used on offense as well as defense. This makes it particularly useful for surviving

Boss panels, as most defense battle cards cannot be played in this circumstance (unless the player is Sherry.) Characters like Syura and Alte that want to take controlled amounts of damage can use Rbits to help manage the damage they take in order to get their health low safely. Rbits is also an extremely reliable card for Nath to gain active extension stacks with. She can play it at any time after norma 2 for a low cost, it helps her survive while she is low on stacks, and opponents cannot use it against her offensively while she is weakened. Any player that prioritizes survival while still leaving the option open to attack open should consider this card.

The trade off is that Rbits can never negate damage, only reduce it, as blocking guarantees that the player will take at least 1 damage. Because of this, Rbits becomes useless when the player is at 1 HP, excluding situations where the user has a defender shield in Co-op mode. Because this card takes away the player's ability to dodge, it makes Rbits less useful for evasion based characters like Suguri or Hime due to their low defense stats. Many of them would rather bring

Rainbow-Colored Circle instead. This also prevents the user from avoiding weak attacks that would otherwise be easy to dodge. Offensive characters such as Tomomo and Kai face a catch-22 with this card. While it does provide them with some much needed survivability, it also does the same for their opponents, making it harder for them to KO other players. Kae in particular should not add this card to the deck, as it can help opponents survive her attacks long enough to issue a devastating counterattack into her low defenses. Using it herself will decrease her attack and force her to rely on her extremely poor defense as well.