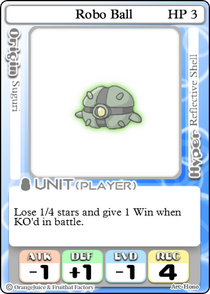 Robo Ball (ロボボール Robobōru) is one of the playable NPC characters in 100% Orange Juice!.

Pros
+ Above average DEF
+ Loses half the normal amount of stars on KO
+ Low recovery time
+ Only worth one win, making it a less likely target for win seekers
+ Hyper is very inexpensive and has a very low Norma requirement, and can be used to both protect Robo Ball and to strike back at opponents 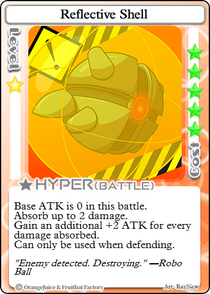 Base ATK is 0 in this battle.
Absorb up to 2 damage.
Gain an additional +2 ATK for every damage absorbed.
Can only be used when defending.
Hyper Info
Effect Type
Battle
Level
1
Cost
5 ★
Symbol
[[File:|30px|link=]]
Illustrator
RayNew
"Enemy detected. Destroying." ―Robo Ball

Robo Ball's Hyper is Reflective Shell. When used in a battle, the player has their ATK stat set to 0, while simultaneously gaining a shield that can absorb up to 2 points of damage. The player will gain +2 ATK for every point of damage absorbed by the shield.

Reflective Shell is an extremely useful tool for Robo Ball in particular, as it provides it with a substantial ATK buff. The expected maximum yield for this card is an additional +4 ATK and 2 damage absorbed, which makes it an absolute powerhouse when defending. Furthermore, characters with positive ATK stats such as Star Breaker will actually have their ATK lowered from using this card, which makes it far less useful in the hands of such characters.

The presence of this card in the game at all has the ability to deter opponents from pursuing Robo Ball. If Robo Ball receives a Hyper through a means that reveals it, such as

Passionate Research, it can be used as a deterrent, although players should be wary of cards like

Scrambled Eve being in play if they choose to do this. Robo Ball's Hyper works well in conjunction with its passive, as enemy players gain less Wins and Stars for when they KO it. This can make Robo Ball too risky of a target for how small the reward is.

Since Reflective Shell applies its effect after the Defend or Evade command, it may be a viable decision to botch an Evade roll in order to break the shell and get the full boost. Any opposing roll above a 1 but below a 5 theoretically has higher average output but comes with the risk of completely evading the attack and wasting the Hyper. Meanwhile, it should also be considered that attack rolls of 3 do one damage if botched, 4s do two damage, and any roll of 5 or above both can't be dodged but will KO Robo Ball at full HP. Overall, the Defend command should be considered over the Evade command, even if the opponent rolls low, but if players need to (or want to) take the risk, they can try to botch an evade roll against a 2 or 3, but 4 isn't recommended.

There are several ways to counter Reflective Shell. The easiest way is to use removal cards such as

Scrambled Eve, but that is common among most, if not all, Hyper cards. A particularly aggressive player can simply try to get Robo Ball to burn any Hypers in their hand before making a full-on assault by engaging in smaller skirmishes, but this can easily backfire. Another strategy would be to simply outdamage the shell, albeit less recommended. Robo Ball can, on-average, negate 4-5 damage from the Defend command and two from Reflective Shell, meaning that it takes a roll of 10 to gain majority odds of KOing a full HP Robo Ball with Reflective Shell and a roll of 12 to guarantee a KO, but it is possible to KO Robo Ball with a roll as low as 7. Weakening Robo Ball first can aid in this strategy immensely as well. This can be achievable by using a character like Kae, but would require using far too many of your resources to be considered unless Robo Ball is about to win otherwise. Most of the time, simply getting Robo Ball to use their Hypers beforehand is a better option. That all being said, the easiest counterplay to Reflective Shell is to avoid it entirely, either by not engaging Robo Ball directly or using a character like Iru which can not be affected.

Robo Ball's Hyper does not change.

Robo Ball's base stats give it 54 starting stars and a discount of -35% at shops.

To unlock Robo Ball as a playable character, along with its unit card and Hyper card as binder collectibles: