Rockin' Android is an American-based independent company that specializes in licensing, localizing and publishing indie Japanese (or doujin) games in English. The company was founded in September 2008 by Enrique Galvez.[1][2][3]

"We look for games that have familiarity to players outside Japan, easy to pick up and play but addictive." -Enrique Galvez[4] 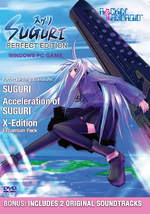 The cover of SUGURI Perfect Edition

From the 1980s to 1990s, Japanese animation saw a surge in popularity in the west. During this boom, Enrique Galvez owned a business, Banzai Anime, in Los Angeles, California. Thanks to the boom, in the late 1990s his business transformed from a small firm to a large retail operation by the renting out and selling many anime videos. This successful business allowed Galvez to make 3-4 business trips to Japan every year, it was at this time Galvez developed a hobby for playing doujin video games, even though they were not a part of his business.[5][6]

For five years, Galvez planned to start a new company after noticing the increase of game quality by Japanese developers and wondering how they would fare in the western markets. Three years, into his planning, he attended Comiket in 2007 and bought many doujin games, one of them being SUGURI. Galvez was impressed by the quality of the games and at that night, he penned the idea for Rockin' Android.[7][8]

In the next year, at October, Galvez used his business contacts and called friends of friends to search for a doujin circle to make a licensing deal with. It was here that he met and chose Orange_Juice for their first licensing deal, citing Orange_Juice's pedigree and dedication to fans as the reason they were chosen. With only a handful of employees, Rockin Android localized and released SUGURI Perfect Edition to western markets on June 30th, 2009.[8]