100% Orange Juice Wiki
Register
Don't have an account?
Sign In
Advertisement
in: Boost cards, Level 1 cards, Base pack,
and 3 more 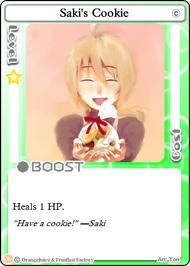 Saki's Cookie is a collectible Boost card that can be acquired from the Base Pack.

When used, the player heals 1 HP.

Saki's Cookie is a cheap and reliable healing option for just about any character. While it only heals 1 HP, it costs 0 stars and can be played from the start of the game. Characters with low base HP recover a much larger fraction of their HP compared to characters with a higher HP stat, making it more useful for characters like Saki or Peat. Characters that also have high DEF like Nanako and Marc benefit the most from this card due to the survivability 1 HP provides. These two factors make Saki's Cookie an excellent card for Mei. She can use it on the first turn to get

Red & Blue early and can use it later to heal herself, preventing KOs and the loss of

Red & Blue. Characters with very high DEF like Kyoko also enjoy having this card available, as it effectively gives them one more battle that they can survive. The difference between being at 1 HP and 2 HP in a battle is often a life or death difference for these characters due to their low EVD, or inability to dodge at all in Kyoko's case. Miusaki has a similar use for Saki's Cookie, allowing her to recover her HP up back up above 2 to make herself much harder to KO in combat thanks to her passive.

In general, the more max HP a character has, the less useful Saki's Cookie becomes for them. Characters with high HP but low DEF like Marie Poppo and Flying Castle tend to prefer Pudding or Dinner due to the increased healing they provide. Offensive characters that rely on picking players off like Seagull or Iru may not want to have Saki's Cookie in the deck, as it can help opponents survive their assault. Evasive characters with a dodge or die playstyle like Suguri or Chicken rarely take enough damage without being KO'd outright to make the healing worth it. Their decks usually contain cards that boost their EVD like

Rainbow-Colored Circle instead to prevent the damage from happening in the first place. Saki's Cookie is also a useless card for Kiriko, as her passive prevents healing and opponents can use it to heal themselves out of range of