100% Orange Juice Wiki
Register
Don't have an account?
Sign In
Advertisement
in: Level 3 cards, Event cards, Cards that cause star loss,
and 2 more 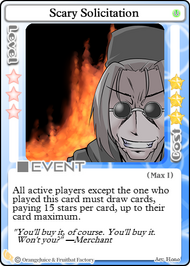 All active players except the one who played this card must draw cards, paying 15 stars per card, up to their card maximum.
Level
3 ☆
Cost
30 ★
Limit
1 per Deck
Deck Points
N/A
Symbol
30px
Illustrator
Hono
Uncommon Card
Mixed Pack
"You'll buy it, of course. You'll buy it, won't you?" —Merchant

Scary Solicitation is a 3-star event card. When activated, each of the user's opponents draw card until they reach their maximum hand size. For each card an opponent draws, they lose 15 stars. If an opponent's hand is full or over capacity, they are unaffected by this card.

Scary Solicitation has a similar effect to

Present for You, as both cards fill up the player's hands. The lost stars can be used to deny star normas to multiple opponents. Characters who have hyper cards or passive abilities that scale with the number of cards in their opponent's hand can use Scary Solicitation as a way to power themselves up. The pair of Tomato & Mimyuu can both make use of Scary Solicitation, using it to force opponents to draw

Evil Spy Work - Execution and fill their hands for massive

Waruda Machine, Blast Off! boosts. Although expensive to do, Sweet Breaker also makes good use of this card in order to make

Melting Memories reverse as many cards as possible. It pairs well with

Play of the Gods, circumventing it's high cost and making it more likely to be played.

Unfortunately, Scary Solicitation is a very situational card with a high star cost. Its 30 star cost makes it very difficult to use to the player's advantage, since the user will very likely lose more stars than their opponents and not draw any cards. When it is impactful, it still provides opponents with a huge boost to card advantage. It is easily rendered useless by opponents who hang on to their cards. Even combat type characters who have the stars to spend on it cannot gain much advantage since the cards gained by the opponents can be used to defend themselves, and defeating opponents usually cost them more stars. Aru and Mei are effectively countered by this card, and should never add it to their decks.