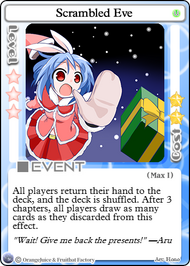 All players return their hand to the deck, and the deck is shuffled. After 3 chapters, all players draw as many cards as they discarded from this effect.
Level
3 ☆
Cost
20 ★
Limit
1 per Deck
Deck Points
N/A
Symbol
30px
Illustrator
Hono
Uncommon Card
Acceleration Pack
"Wait! Give me back the presents!" —Aru
Event Card 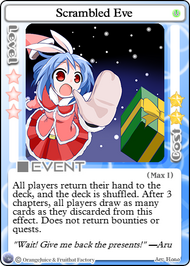 All players return their hand to the deck, and the deck is shuffled. After 3 chapters, all players draw as many cards as they discarded from this effect. Does not return bounties or quests.
Level
3 ☆
Cost
20 ★
Limit
1 per Deck
Deck Points

Scrambled Eve is a 3-star event card that shuffles all cards among the players' hands into the deck. Upon use, all players will return their entire hand to the card deck. Then, the deck will be shuffled, and 3 chapters after the use of this card, every player will draw cards equal to how many they were holding before.

Scrambled Eve is the most reliable way to empty one or more players' hands, although just for 3 chapters. It can be used to get rid of troublesome gift cards and prevent opponents from playing event, battle, or boost cards against the player until they can draw more. In a pinch, it can even be used to stop an opponent like Saki or Chicken from laying their traps on the player's home base. Aru can use Scrambled Eve to empty her opponents' hands in order to get more value out of

Present for You, although she will have to draw it after Scrambled Eve is played. Scrambled Eve also gives Mei an easy way to get

Red & Blue back regardless of the other cards in her hand. For everyone else, it is important consider that Scrambled Eve can cause the player's hyper card to be shuffled into the deck where any player can draw it. Offensive characters with poor hypers like Yuki or Tomomo are not particularly bothered by other characters having their hypers and can take advantage of the lack of cards to attack their opponents. Although he cannot play it himself, Store Manager loves having his cards taken away and benefits from his opponents being unable to play battle cards against him.

The most obvious drawback to Scrambled Eve is that it causes the player to lose any cards that they were holding. Any character that relies on having a full hand will be heavily set back by a Scrambled Eve. This includes characters like Peat and Nico who like to hoard hyper cards, characters like Tsih or QP (Dangerous) that hold cards for passive boosts, and characters like QP who want cards in general to keep their options open. Even characters that benefit from this card can be harmed if it is played at a bad time, causing them to shuffle powerful cards like

Present for You and

Red & Blue into the deck for anyone to draw.

As every player will eventually draw as many cards as they returned from this effect, it can also be considered as a slightly altered and costly version of