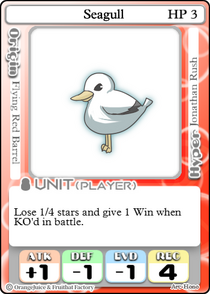 Seagull (カモメ Kamome), also known as Jonathan (ジョナサン Jonasan), is one of the playable NPC characters in 100% Orange Juice!.

Sporting a lower recovery stat, lower HP pool, and lower defensive options, Seagull is an overall tricky character to play as. As such the best way to play Seagull is to be far away from others. Much like an actual seagull, Jonathan must wait for an opportune time to attack.

With only a +1 to attack, Seagull is not meant for wins. Rather it is best to gather stars and draw cards until one manages to get their hyper. Seagull's hyper,

Jonathan Rush, is his strongest tool and as such the game should be played around obtaining this hyper and waiting for a player with a lot of stars to enter a low health threshold.

Luckily, Jonathan's passive is perfect for this play style, as players attempting to steal your stars only get a measly 1/4 of your stars allowing Seagull to make a getaway without losing too much from retaliation.

It is recommended to bring a few battle cards such as

I'm on Fire! in order to help secure a strategic kill. This is imperative as many characters like Aru have a high evasion stat.

Owing to his minuscule health pool and terrible defensive stats, Encounter and Boss panels should be avoided at all costs, especially the latter as an encounter with the boss is almost certain death. 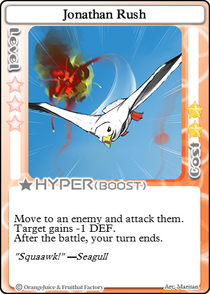 Seagull's Hyper is Jonathan Rush. When used, the player will be prompted to target a non-KO'd opponent. Upon doing so, the player will move to the target's current panel and initiate a battle with them. The target will gain -1 DEF for the duration of the battle. After the battle, the player's turn ends.

This effect does not count as a warp for the purposes of effects that trigger on warp.

Jonathan Rush allows the player to attack any player regardless of how far away they may be. As a result, a viable usage of this card is to pick off enemies with low HP. It is advised to combo this card with another attack-boosting card if dealing with characters with a high EVD stat. Another use of this card is to move to a more advantageous position on the board, such as near the player's home. 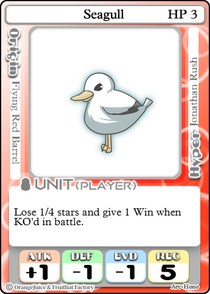 Seagull's Hyper, Jonathan Rush, does not visibly change in Co-op, but has a slightly different effect. The Hyper can only target enemies and not players, but otherwise functions the same as in Normal mode.

Seagull's passive and Hyper are unchanged in Bounty Hunt mode.

Seagull's base stats give him 42 starting stars and a discount of -5% at shops.

To unlock Seagull as a playable character, along with its unit card and Hyper card as binder collectibles: