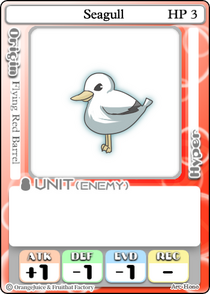 Seagull (カモメ Kamome), enemy variant, is one of the NPC enemies on boards in 100% Orange Juice.

Infamous for its attack rolls, Seagull (Enemy) is potentially the most dangerous of all the

Encounter panel units due to its +1 ATK. Despite its reputation, it is not uncommon for Seagull to be instantly KO'd before it gets a chance to attack thanks to its -1 DEF and EVD stats.

Seagull (Enemy) can be fought when landing on

Piyopiyo Procession traps, or on the board in Kai Episode 1. Special variants can be fought on