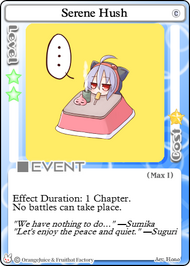 5
Symbol
30px
Illustrator
Hono
Common Card
Pudding Pack
"We have nothing to do..." ―Sumika
"Let's enjoy the peace and quiet." ―Suguri

Serene Hush is a collectible Event card that can be acquired from the Pudding Pack.

When used, no battles can take place for 1 chapter. This includes

Serene Hush offers players a turn without having to worry about bosses or opponents smashing their HP and taking their hard-earned stars. Serene Hush is extremely useful during BattlefieldBattlefield
Every 6 Chapters, all

Encounter panels. This effect lasts for 3 Chapters. or Boss EncounterBoss Encounter
When Norma level 4 is achieved for the first time by any player, all

Boss panels. While Boss Encounter is in effect, any player who stops on a Boss panel will battle the Boss unit. This event will continue until the Boss unit is defeated., as players cannot trigger the panels while it is active. This allows more passive characters to go a turn without worrying about taking damage from combat and can deny more offensive characters some wins. Since the card prevents players from challenging opponents that they pass, Serene Hush can be an effective tool for players to get their opponents in front of them. From there, the player can seize the initiative in combat the next turn or keep the player from attacking them by staying behind them. Just about any character that plays cards can benefit from Serene Hush, but passive players tend to get the most use out of it.

Although aggressive characters like Tomomo or Suguri can benefit from the card if played on their terms, it can also be used by their opponents to escape their attacks. Serene Hush can also cause characters with hypers that provide a multi-turn combat advantage to lose a valuable turn of their boost, such as Kai and his hyper,

Protagonist's Privilege. Star Breaker is perhaps the character most harmed by this card, as she depends on gaining wins from battles in order to achieve norma and win.

In co-op mode, Serene Hush can be extremely useful, as it can be used to negate dangerous, potentially game-ending, boss cards such as

Watermelon Splitting. Activating the card before the boss activates these cards will effectively nullify the damage that could be done to the player and their allies. Furthermore, this card can be used to buy the player's team precious time during the Terror event (which spawns additional

Boss panels throughout the board), by providing protection to the living characters and another opportunity for recovering players. This can prove especially effective in Hyper difficulty, where bosses have the ability to spam dangerous high-level event cards that trigger battles early on. Consequently, the card has a rather high deck point cost, since under the right circumstance it can save a team from complete defeat, and thus players must decide carefully how many copies of the card they can feasibly pack.