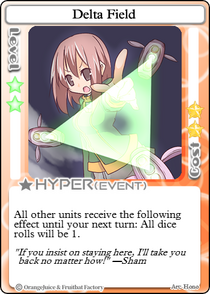 All other units receive the following effect until your next turn: All dice rolls will be 1.
Hyper Info
Effect Type
Event
Level
2
Cost
20 ★
Symbol
[[File:|30px|link=]]
Illustrator
Hono
"If you insist on staying here, I'll take you back no matter how!" ―Sham

Sham's Hyper is Delta Field. When used, all units except the player will roll natural 1s for all dice rolls for 1 chapter.

Delta Field, if timed properly, can be used to great effect in a variety of ways. Similar to

Witch's Hair Lock, the card enables the player to control the opponents' next actions at a relatively affordable price, but also features the added bonus of making the opponent extremely vulnerable in the process. The Hyper also essentially removes all the power from effects that grant additional dice such as

Accel Hyper, and the SprintSprint
Every 6 Chapters, all players roll a base two dice for movement (up to 4 if using a card increasing your role). This effect lasts for the duration of the Chapter. field event, as a result of forcing 1s. As to be expected, the effect enables a variety of both offensive and defensive tactics, including, but not limited to:

The main downside to Delta Field is that it is only powerful at opportune moments, and is solely based on the opponents' movement/luck. As the Hyper's effect does not deal damage, or increase Sham's stats, it is critical that the player times the effect perfectly or its effect will be wasted and have very little impact. The Hyper is also specifically vulnerable to cards like

Awakening of Talent, as the most recently used card will take precedence.