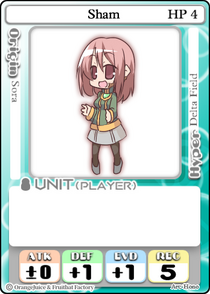 Sham is a character with fair defensive stats and a powerful Hyper. Sham features a lowered health stat, and in return has +1 in both DEF and EVD. This should allow Sham to handle

Encounter panels well and stand a chance against the

Boss if healthy. With a neutral ATK stat, Sham is not useless if she needs to fight. Although, Sham ideally won't have to engage in combat without cards to assist her.

The downside to Sham, however, is while her stats are good defensively, she doesn't have a direct way to gain the lead, nor are her defensive stats as strong as a character like Fernet. Due to this, Sham relies more on higher rolls -- especially during

Delta Field -- and on cards in general, in order to succeed.

Cons
-Neutral ATK stat makes stat line abusable.
-May have to depend on cards or highrolling.