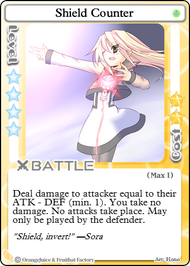 Deal damage to attacker equal to their ATK - DEF (min. 1). You take no damage. No attacks take place. May only be played by the defender.
Level
4 ☆
Cost
20 ★
Limit
1 per Deck
Deck Points

Shield Counter is a 4-star battle card that can only be played when the user is defending. When played, the attacker takes damage equal to their ATK minus their DEF (minimum 1 damage) and the battle ends. If the attacker is KO'd by this damage, the user does not receive wins or stars and the attacker does not lose stars.

Shield Counter is one of the most effective cards to stop an attacker in the game. It can be considered as an upgraded version of

Tactical Retreat, as both cards allow the user to escape the fight without a scratch. Shield Counter improves on

Tactical Retreat by not paying the opponent stars and by not being negated by battle cards in exchange for its higher norma requirement. Shield Counter works best against enemies with high attack, but low defense. Characters such as Yuki and Miusaki suffer from this card the most as they will take a large amount of damage. Since the battle is ended immediately after the damage is dealt, any battle cards played by the attacker will be wasted.

Big Magnum are particularly painful for the attacker due to the extra damage they cause their user. It also denies certain benefits from other battle-oriented cards, such as

Despite it's stopping power, Shield Counter can be difficult to play. Its high norma requirement makes it unplayable until the late game, forcing the player to choose between hanging on to it for a crucial play or discarding it for cards that will help them get ahead sooner. If the user does manage to KO the attacker, they will not suffer any ill effects other than the revival timer and any wasted cards. This can be tough for star collectors, as the high cost of Shield Counter is not recovered by a KO. It is useless against

Boss panels due to the player having priority in these battles (excluding Sherry). Characters with high impact hypers that affects battles such as Peat's

Blue Crow the Second or Sora's

Extraordinary Specs need to consider if the benefits of Shield Counter outweigh the risk of having their hyper countered.

Another Ultimate Weapon is countered harder than any other card by Shield Counter, causing the user to waste all of their stars and lose the hyper card. As such, Nath should never add this card to the deck. Similarly, Kae, with her tendency to have (and seek out) large negative defense values, will almost always be instantly KO'd by this card, and should also never add it to the deck.